Death of a hard disk

At home, I store data I care about on a network-attached disk array (a Netgear ReadyNAS Ultra 6). It is populated with 6 hard disks, with of 2 of these providing RAID-based redundancy.

Recently, one of the disks in the array failed, and the NAS kindly sent me an email to let me know. So I ordered a replacement, which arrived a few days later. When it arrived I went downstairs and opened the door of the unit to remove the faulty disk.  At that point I could hear a bit of a whining noise, which sounded a bit like a bearing had gone. Luckily the noise stopped when I pulled the bad disk out. I put the new disk in and left the unit to rebuild the RAID array.

A couple of days later I decided to open the dead disk to see if I could see what went wrong.

Here is what I saw when I opened the disk up:

Well, that wasn’t really what I expected. The insides were covered in a very fine dust, a bit like laser printer toner. Halfway between the centre and the edge is a shiny groove that has been etched into the surface! The outer section of the platter is duller, because it is covered in more dust.

Here’s a closer view of the surface of the top platter: 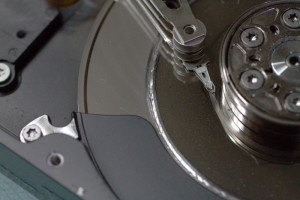 You can see that the groove in the platter is seriously deep!

The next step was to completely disassemble the disk drive. This disk contains two platters with read/write heads on each side. When I looked at the platters, they all had similar damage, although one side of the second platter had more substantial damage: 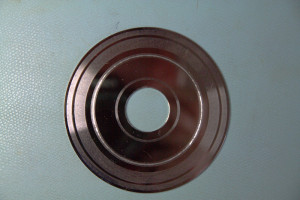 My guess is that there was a head crash on the platter in the photo above, near the outside. Normally the read/write heads float on a cushion of air a few nanometres above the surface. If some contaminant gets in between the head and the platter, damage will result. I suspect this is what happened, on the outside edge of the platter. Once this happened, the surface became damaged and tiny particles began being scraped off the surface. Eventually the head moved to a point halfway along the radius of the disk and stayed there. Now that the disk housing contained dust from the initial damage, this caused the other three heads to crash on to the disk surface. Soon the disk was filling with dust and grinding away at the surface underneath each head. By this time, the disk was reported as a failure, and so the head stayed in the same position digging a deeper and deeper trench.

I guess if I’d left it for a while longer, it may well have etched all the way through, causing physical separation of the inner and outer parts!